Combine matcha and vanilla into a delicious syrup for use in cocktails and other beverages. Goes great with milk and vodka.

Creating simple syrups is, well, simple. It's also fun to come up with crazy or delicious combinations. The first time I wrote about syrups, I ended up testing a lot of different recipes. The second time around was still a big compilation of cocktails and syrups I liked. This time, I'll show some restraint and concentrate on 1 syrup recipe and 1 cocktail recipe.

If you read my previous article about matcha as a cocktail ingredient, then you know that I really like this delicious green tea. It's only natural that I had to come back and try something new with it again.

Making simple syrup is easy. Just mix sugar and water, heat it up and you're done. Adding one additional ingredient, like fruit or spices, is also no rocket science. The end result usually turns out tasting like a sweet version of whatever you added. But when you begin to infuse 2 or more different flavors, you have to be careful to find a good balance.

Mix all ingredients in a pan on a low to medium heat. Stir until the sugar and matcha have dissolved, but be careful so it doesn't get too hot. Let the mixture infuse for at least 10 minutes. Strain into a clean bottle and top with a dash of vodka to increase shelf life.

Whenever I think about the taste of sweet matcha, I remember the matcha lattes I drank in Japan. Sweet and wholesome milk mixed with the unique green tea flavor. This gave me the idea for the following spin on the White Russian. 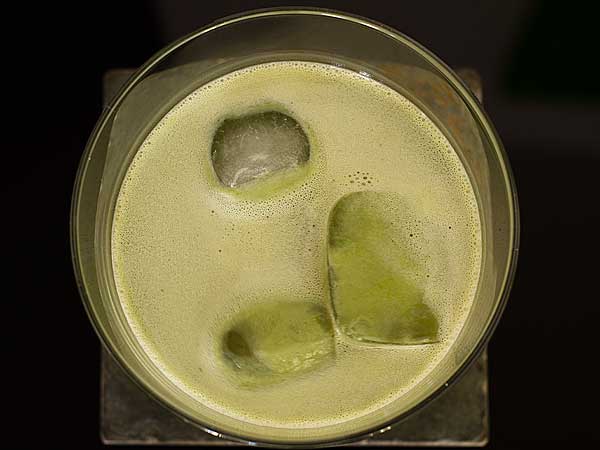 Pour the vodka, syrup and milk into an Old Fashioned glass with ice and stir thoroughly. Alternatively, use a cocktail shaker and add a bit of cream, for a smoother, creamy cocktail.

The coktail is named after the Japanese word midori (緑) for green. It only has a slightly green hue, that will increase with the amount of syrup added.

The flavors blend well, since matcha and vanilla is a pleasant combination. Milk provides a satisfying base in this cocktail, while the vodka adds a little kick. It's sweet, tasty and green. The perfect cocktail for anybody who likes a matcha latte.

The recipe lends itself to experimentation. You can adjust the amount of milk if the flavors are too strong. The type of milk you use has also a great effect on the end result. A milk with a high fat content is usually the best choice, since fat carries flavor. If you use less syrup, the cocktail becomes less sweet and the vodka is more noticeable.

For those of you who like a really creamy cocktail, I suggest to substitute the milk with cream and then shake the whole thing. It's a bit more work, but creates an indulgent variation. I tend to favor the milk version though, since I prefer lighter cocktails.

It's a tasty syrup. Matcha is a strong flavor, so using it in cocktails requires some tweaking. Usually I end up making a bold cocktail in which matcha is the main flavor. Since vodka is pretty flavorless, it's a great spirit for matcha based cocktails.

The addition of vanilla to green tea introduces another flavor, which brings forth an even more dessert-like feeling. Mix the syrup with hot milk and you have a wonderful, non-alcoholic beverage. It probably is a great ingredient for baking too.

Stay up-to-date on latest recipes by following me on Twitter or subscribing via e-mail. You can also leave a comment below and share your recipe ideas or opinions on this article.