If you are like me, you love bacon and bourbon. And since there is a way to combine both things, I started some research on the technique of fat-washing bourbon. I wanted to try this for a long time and in theory it is quite easy. As long as you have enough bacon.

What exactly is fat-washing? To put it simply, it is similar to infusing alcohol, but the alcohol absorbs the aromas of fat instead of oils. If you are hungry for a more detailed explanation you can read about it here. Sounds easy enough.

The process seems pretty straight-forward. You take some bourbon, liquid bacon fat and pour it all in a jar. Let the flavors infuse and put everything into the freezer. After the fat has frozen you can remove the frozen fat and are left with delicious fat-washed bourbon. That's how it's supposed to go. Sadly my experiment didn't go as smoothly.

First I took some bourbon. It's always a good idea to start with a less pricey bourbon, so I grabbed a bottle of Jim Beam I had lying around. Even if everything went horribly wrong not much would be lost.

I suggest filling the bourbon into a mason jar as this lets you remove the frozen fat easier. Or so I thought. Anyway, I took roughly 200g of bacon and cut it into thick strips. As it later turns out this was not nearly enough bacon.

Next I fried the bacon strips until they were crispy and my pan was greasy. This was my way of getting the bacon fat needed for fat-washing. Maybe the mistake was not that I used not enough bacon, but not using pure bacon fat in the first place. After all, you only have to melt it and are done. 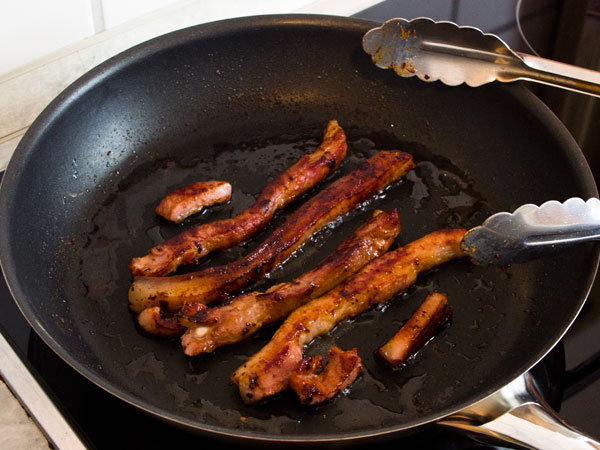 As you can see the amount of fat that had left the bacon after frying was rather minuscule. Therefore I decided to do what chefs do and deglazed the pan using some of the bourbon. It would end up together anyway, so this is a good way to remove the maximum amount of flavors. It also smells pretty damn good. 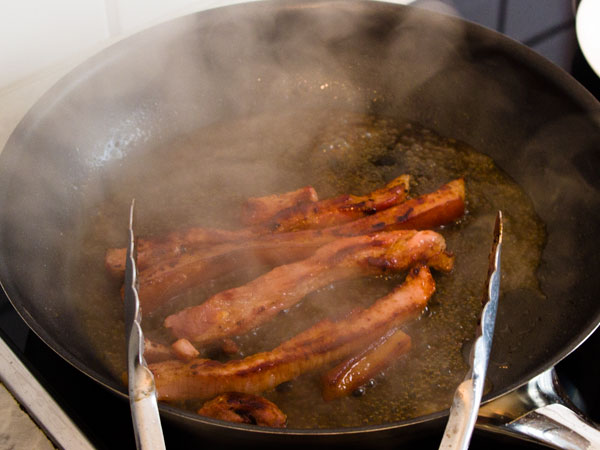 After deglazing the pan I removed the bacon strips and poured everything into my mason jar. I could see that there was quite some fat in there, so I was pretty content. I let the fat infuse for 4 hours. 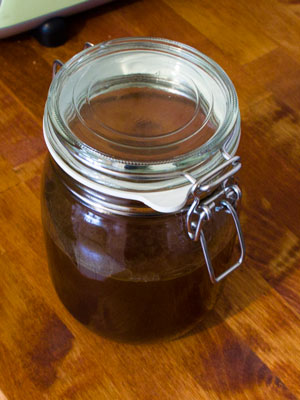 When everything had time to infuse and cool down, it was time to place my jar in the freezer. In theory the fat should have solidified and I would have been able to easily remove it from the jar. The fat did solidify, unfortunately there were lots of small pieces instead of a nice big chunk. 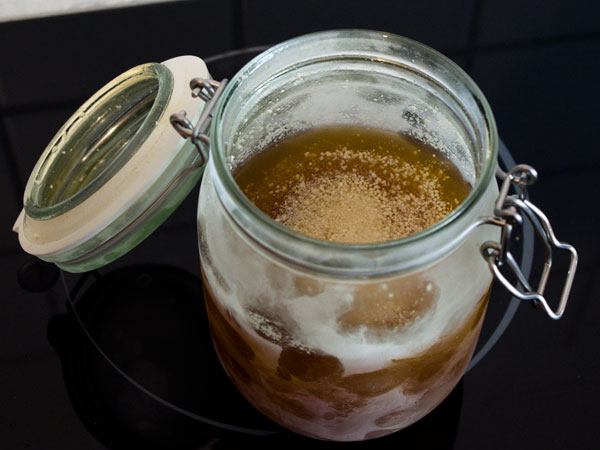 I didn't want to give up, which is why I took a coffee filter and began to strain my bourbon the long and boring way. It went pretty great, but took quite some time and coffee filters until everything was strained. As soon as I was finished I poured the fat-washed bourbon back into the bottle and was ready to take a sip. 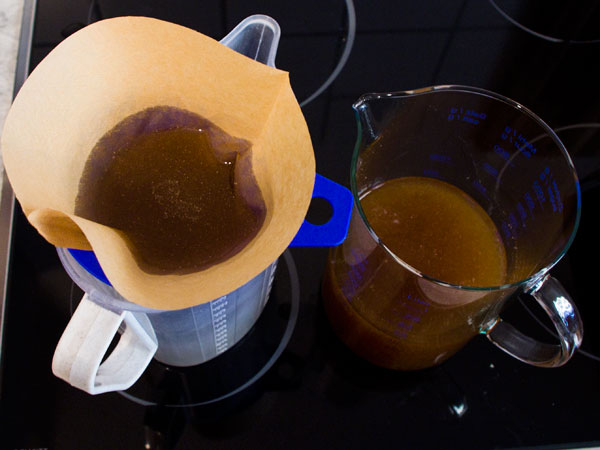 How Does It Taste

As I tried the bourbon neat, I could taste some bacon. But it was a rather subtle taste and not as bold and powerful as I had hoped. The bourbon was slightly greasy too, which adds quite an unexpected feeling when drinking bourbon. So I did what I always do when trying a new bourbon and prepared myself an Old-Fashioned. I could taste that something was different, but it wasn't enough for me to be impressed.

Well, not everything can go smoothly and I suspect my problem was not enough bacon. Usually I like lots of bacon, but I was afraid it would overpower the bourbon. Now I know better! I'll definitely keep trying and as soon as I have found a great recipe and the right amount of bacon I will write about it here. I won't be content until my bourbon has a nice bacon-y flavor.

If you have any suggestions on how to improve my process, besides using more bacon, leave a comment and I'll be sure to try it out. Next week I will participate in Mixology Monday again, so stay tuned for this month's interesting topic.

Unfortunately I could not make my deadline of releasing a new post today. After a long and stressful week…

Christmas season is upon us, which means it's just the right time to go get some eggs, booze and…