Christmas season is upon us, which means it's just the right time to go get some eggs, booze and other not-so-healthy stuff and whip up some eggnog. The perfect treat for when it's cold outside and you want something rich and flavorful.

Traditionally we don't drink eggnog in Germany. We mostly stick to mulled wine or Feuerzangenbowle. But years ago I wanted to try this well-known American beverage and made some eggnog myself. Of course I added a healthy portion of rum and cognac too. It was incredibly delicious and I could see why it is a traditional holiday drink in the United States. Sadly I never came around to make another batch... until now.

Since I was unable to locate the recipe I used all those years ago, I had to find a new one. The basic recipe for an eggnog is quite simple, so I wanted to add a bit of my own signature. I took the liberty to fuss around a bit, but that doesn't mean the ingredients are hard to come by or unusual. Nevertheless, some subtle changes go a long way. 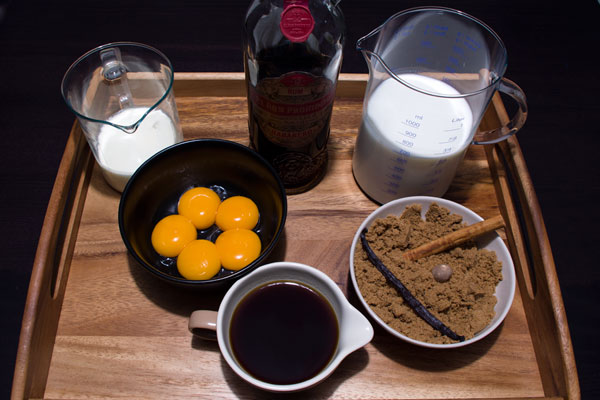 The first improvement I made was to infuse the milk with spices. I love spices, especially vanilla, so I really wanted my eggnog to be full of Christmas flavor. It's really easy too.

Just add milk, cream, nutmeg, vanilla and cinnamon to a pan and heat up gently. Don't let it boil. When hot, remove from the heat and let the mixture steep until it has cooled down. Strain the milk mixture and you're ready.

It's important to scrape out the vanilla bean pod and use the seeds too, otherwise you won't have a healthy dose of vanilla in your eggnog. I also broke down the cinnamon stick so it had a greater surface area to give off more flavor. I used Ceylon cinnamon, because it tastes just so much better than the regular stuff.

Next, I used Light Muscovado instead of normal sugar. I wanted that subtle taste of molasses and a richer sugar flavor. This also pairs well with the vanilla I used earlier. To get a good consistency, beat egg yolks and the sugar until everything is smooth and creamy. There shouldn't be any lumps of sugar left in the mixture. 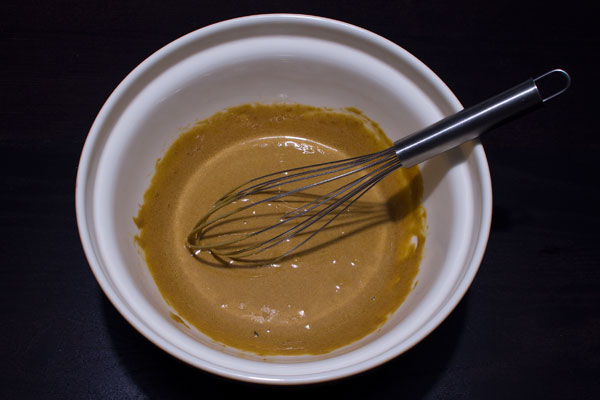 After everything was ready, I slowly added the milk mixture to the egg yolks and sugar while carefully stirring to combine everything. If you like your eggnog without alcohol you are done now, but I suggest adding some nice dark rum to it and stirring again. Of course you can use cognac, bourbon or any other kind of spirit you fancy. Just make sure it has a heavy body; something aged in wooden barrels with lots of flavors. 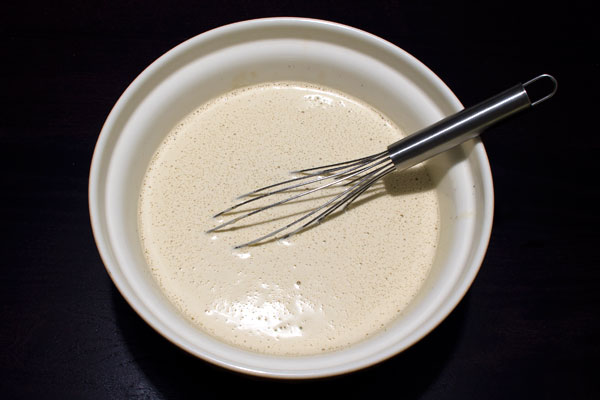 The final step in my recipe was the hardest one. Filling the tasty eggnog into a sterilized bottle and refrigerating it overnight to let the flavors combine. It should keep up to a week, but it all depends on how much alcohol you end up adding. Drink it straight away if you must, but it gets better with age.

Letting your eggnog age isn't such a bad idea. It helps the flavors to develop and you get something better than the average eggnog. Experiments have shown that depending on the alcohol content in your eggnog, even salmonella are gone when you age your eggnog for several weeks. Nevertheless, working cleanly is a must and using fresh and local eggs has lots of other benefits besides the reduced health risk. They usually taste much better than the ones you can buy in your average supermarket and the chickens enjoy a way better life.

Add the milk, cream and nutmeg to a pan. Scrape out the vanilla bean and add the seeds and bean pod to the milk mixture. Break the cinnamon stick into small chunks and add them too.

Gently heat the milk mixture until hot, but not boiling. Remove the mixture from the heat and let it cool down. Strain once everything has cooled.

Beat egg yolks and sugar to a creamy consistency, making sure there are no lumps of sugar left. Slowly mix in the strained milk and add the rum.

Fill into a sterilized bottle and refrigerate at least overnight. Before serving, dust the eggnog with freshly grated nutmeg.

The result is amazing. Very rich and creamy with lots of nutmeg and vanilla. It really tastes like Christmas. Since I went easy on the rum there are only subtle hints of it, but if you so desire just add more. If you want your eggnog even richer, add an egg or two.

I tried this eggnog cold (don't use ice) as well as warm. Both ways are fine. If you serve the eggnog warm, it feels much richer and is the perfect drink to have while watching the cold weather outside. The rum gets a bit more prevalent too. When served cold it's a much smoother experience and feels less rich. In my opinion this makes it easier to enjoy more of it.

Now that I have shared my recipe with you I won't lose it again. Despite not being the usual holiday drink around here, I plan to make a bottle or two once in a while and enjoy some tasty eggnog. There is still lots of room for experiments there. Maybe I will try some extra spices. I imagine some cardamom could be a great addition.

I hope that I could inspire you to make your own eggnog full of bold flavors. Nothing is better than making it yourself and using fresh ingredients. Be adventurous and whatever you do, don't let your eggnog be boring.

If you are like me, you love bacon and bourbon. And since there is a way to combine both…

Only one month until Christmas, which means the time for Feuerzangenbowle has arrived. Around here this delicious punch is…