This time I want to write about one of my favorite cocktails. Which is as delicious as it is simple. Even better, it comes in a hot or cold version, which means you can enjoy it all year round. Grog. A tasty mixture invented by the Royal Navy to keep their sailors happy and healthy.

The inspiration for this week's topic comes from Mixology Monday which is all about overproof spirits. The host this time around is Dagreb of Nihil Utopia.

My theme this time is overproof. Or rather how you utilize overproofs. Do you sub them into your standards? Save them for accents in particular recipes? Pour them into ceramic volcanoes and set them on fire? Reserve them only for making liqueres? – Dagreb

Overproof for Dagreb means everything above 50% ABV (100 proof), which is great since navy strength rum, which is the main ingredient in grog, is not only in his definition overproof, but also officially according to the gunpowder test.

What is in that grog stuff anyway?

Grog has a long and colorful history. So much that there are even two distinct pages on Wikipedia about it. To keep a long story short: Sailors in the Royal Navy were given a daily ration of rum. This ration was diluted with water. Later citrus juice was added to prevent scurvy. And so grog was born.

Traditionally grog should be made with navy strength rum which gives it a nice bold taste. However, just using water and lime will produce a rather imbalanced cocktail, which is why another ingredient is needed to add the necessary sweetness. Honey. You can use simple syrup, but I find honey adds more flavor and was probably used on navy ships too.

If you like your grog a bit stronger you can add some kerosene, acetone or various other things. 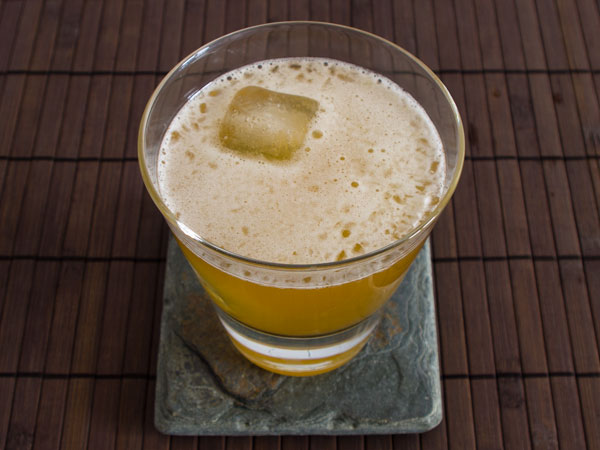 Pour all ingredients into a cocktail shaker filled with ice and shake vigorously for 15 seconds. Strain into an ice-filled Old-Fashioned glass.

I like my grog shaken hard, so it is foamy like the unruly sea. Of course you can fine-strain it to get a clearer cocktail. The taste is very refreshing with a dominant note of rum. The rum taste is not too sharp or strong since the lime and honey provide an excellent counterpart. If you want to bring out the flavors a bit more, then you can use less water. About 30ml of water instead of 45ml should boost the honey and lime flavor as well as the rum.

With the full amount of water I like my grog a bit stronger, so sometimes I use 60ml of rum. Or I omit the water completely and just shake a bit longer and harder. This boosts the flavors even more and you basically end up with a Daiquiri for pirates.

You can change your grog easily by preparing the cocktail with hot water. I often enjoy this during winter when it's snowing outside and I don't want to drink any more Feuerzangenbowle. The recipe is essentially the same, but instead of cold water and shaking on ice, you just top the other ingredients with hot water. 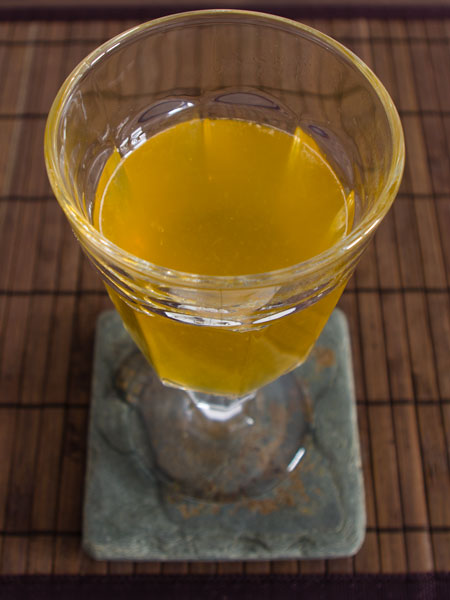 Pour the rum, lime juice and honey into a heat-proof glass or mug and top with the boiling water.

I like this version just as much as the cold one. The sweetness is a bit more prevalent due to the drink being hot rather than cold, which is just the thing you need when it's cold outside. The rum flavor develops wonderfully in hot water and soothes the soul. Because of the hot water the rum flavor is never unpleasant. I made this cocktail using a stronger rum with 73% ABV (146 proof) and it still remained its mellow but warming character.

Both grog versions are dear to me as I love navy rum. While all the premium barrel aged rums are great, I still find a good strong navy rum is the most versatile. It's flavorful and provides a great base for a good grog or a great Dark and Stormy. I encourage you to try some yourself if you haven't already.

And we're getting dangerously low on grog.

I'm a great fan of grog and this cocktail is probably the only reason I always have a bottle of navy strength rum at home. If you love a strong rum flavor then grog is for you. Besides being a delicious cocktail, the ingredients are easily available and the recipe is easy to remember.

Making grog is always great, sadly during the research for this article I used up all my Pusser's Rum. Time to order some more while I think about next week's topic. If you like, follow me on Twitter or subscribe to see how my rum-less life continues. Or leave a comment below, declaring your sympathy.