Last week I promised that I would continue with recipes for my home-made syrups and this week I will do just that and bring you an exotic recipe that uses Earl Grey syrup. The ingredients shouldn't be hard to come by and if you don't have any syrup, you can make it in mere minutes.

As previously announced this post will be a bit shorter and only contain one recipe, so I will continue with recipes using Earl Grey syrup next week to make up for that.

From Britain To Japan

Trying to come up with good combinations for Earl Grey syrup is quite hard, especially if you exclude whiskey or rum as the base spirit. Why did I exclude them? Well I did rum the last time and I didn't want to create just another Old Fashioned with Earl Grey. If I have to limit myself to just one cocktail, I want to deliver something engaging. 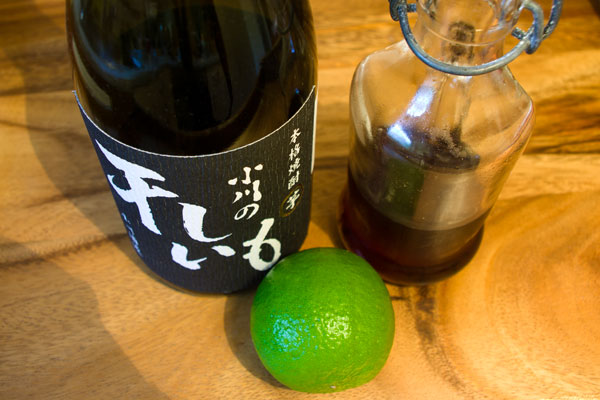 And so my eyes fell on my much used bottle of shochu. I really began to like this Japanese liquor during my trip to Tokyo, where even the cheap stuff did taste great and accompanied quite a few meals in the local Izakayas. It's great if you enjoy it on the rocks, but as you will see it makes a perfect base for cocktails.

Pour the ingredients into a cocktail shaker filled with ice and shake for 10 to 15 seconds. Fine strain into a pre-chilled cocktail glass.

The first thing you notice is that the taste of sweet potato shochu is enhanced and some of the edges are rounded off. The lime adds a lot of freshness and quite some acidity. As with other sour-style recipes you have to try the mixture before you shake and adjust the amount of lime accordingly.

As you drink this cocktail the shochu hits your palate first, immediately followed by lime. Quite refreshing, but the finish is a slow and mellow taste of Earl Grey. It leaves you with some sweetness on your lips and a wanting for more. There is quite a lot going on for just three ingredients, but it all comes together in the end. Adding more ingredients seems like a waste, since the tea and shochu are complex enough.

If you don't have exactly the same shochu I used, you can substitute it for a different sweet potato shochu. Just make sure to use something made from dried sweet potatoes and you should get a similar drink. It would be interesting to see how this cocktail changes when you use a different type as the base, but I imagine it will work equally good as long as the shochu has some sweet flavors.

If you are wondering, the name of this cocktail comes from Tottori where the shochu in this recipe originates from.

I was quite surprised how everything came together. The ingredients are quite different, but combine to a cocktail full of depth. It might seem strange at first, especially if you haven't tried shochu, but this is a cocktail that makes shochu more accessible. Definitely something I will offer my guests to introduce this Japanese spirit.

And that's it for this week, but I will continue my quest for cocktails using Earl Grey syrup. Until next week I will have come up with another recipe and maybe it will even incorporate some whiskey, rye or bourbon. Follow me on Twitter if you want to see if I succeed and how it turns out.

My goal is to always deliver new content just as promised. No matter what happens. As I'm currently moving…