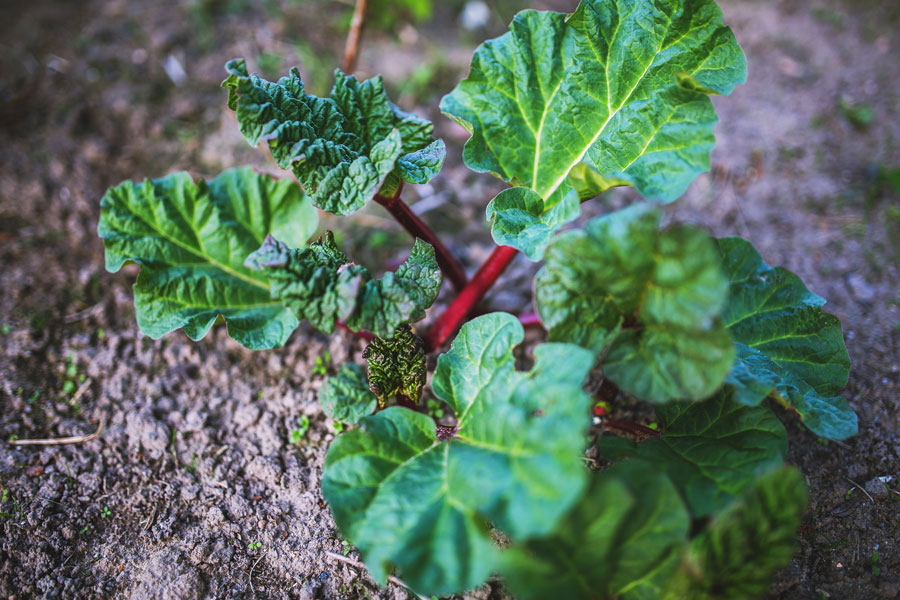 This week it's getting tropical. Up until now I never wrote about Tiki-style cocktails, probably because they tend to always be about rum and fruit juices. However, I love a well-made Mai Tai and I see no reason why I shouldn't be able to concoct something Tiki-esque myself. And because I seem to stumble upon rhubarb whenever I go out to buy ingredients, I decided to bring this unique plant into the mix.

The idea for venturing into the area of Caribbean cocktails is provided by Mixology Monday. The host is Frederic of the cocktail virgin blog and this time it's all about Swizzles.

For this theme, find a classic or modern Swizzle recipe, whether hot or cold. If the creative mood hits you, take the style in your own direction whether in a Tiki avenue, by reformulating a classic cocktail, or via something more Caribbean in feel. – Frederic

Sounds interesting and even without a swizzle stick to call my own, I think it's something I can have fun with.

As I was pondering what I could contribute to this month's Mixology Monday, I noticed that rhubarb seems to hit the shelves again. Since this is a nice spring and summer time plant I thought it would be a great idea to build a swizzle around it.

So I went out and bought some rhubarb. After cleaning and trimming I was left with about 700g which are the base for my rhubarb syrup. Using the flavors in a syrup makes it easy to store and use in cocktails, as well as simple lemonades. After I extracted the flavorful rhubarb juice and turned it into a syrup I was left with almost a liter of this stuff. Way too much for what I need, but it also makes a great gift and can be stored for months. 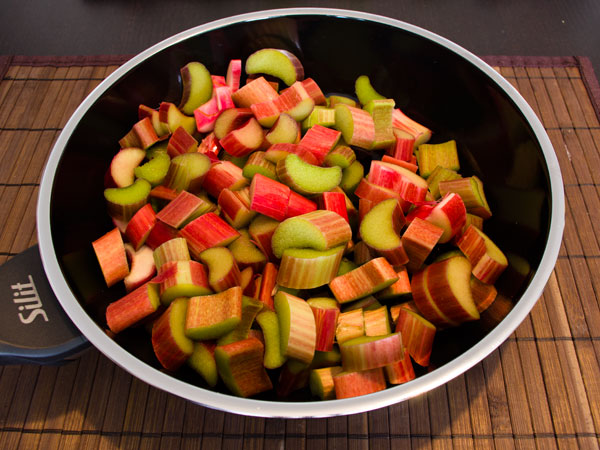 Add the rhubarb and water to a pan and bring to a boil. Simmer the mixture on a low heat for 30 minutes. Strain the mixture and keep the liquid. Make sure to squeeze the rhubarb chunks to extract as much juice as possible (careful as they are quite hot). Clean the pan and pour in the rhubarb and juice from one lime. Gently heat and mix in the sugar. Reduce the liquid a bit and then fill into sterilized bottles while hot. Let them cool lying down. Store in a dark and cool place and the syrup will keep for months.

After making more than enough syrup to mess around with, I thought about what would make a good swizzle. Obviously I wanted to stay close to the original formula and add some slight changes. First I switched grenadine for rhubarb syrup, which is obviously something not often found in Tiki cocktails. Then I wanted to switch the usual pineapple juice for mango juice (basically mango purée mixed with water) for another nice twist.

I don't have any Gosling's or other rum from Bermuda lying around, which is why I use some Jamaican rum mixed with something lighter from Barbados. This should give the drink a pretty solid rum note that isn't too dominant. 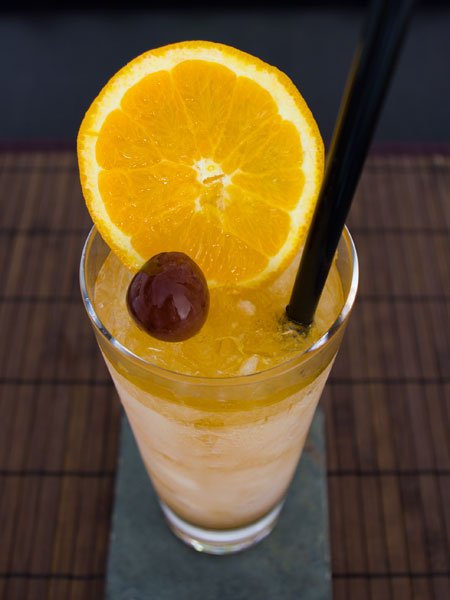 Fill a highball glass with crushed ice and pour in both rums, the orange and mango juice, syrup and the bitters. Swizzle with a swizzle stick or barspoon until the glass is nicely frosted on the outside. Garnish with a brandied cherry and a slice of orange.

The resulting cocktail is a nice blend of rum, orange and rhubarb with just a slight hint of mango. Very refreshing and fruity and it would fit perfectly into the Caribbean. The rhubarb isn't too dominant and reveals itself after the orange and rum. Due to the amount of ice and the splash of lime, this cocktail isn't too sweet. Be sure to adjust the amount of lime to the taste of the oranges, as some can yield sweeter juice than others.

This swizzle can easily be changed to suit different tastes. The mango juice can be substituted with pineapple juice to match the original. This will also give the cocktail a bit more sourness. Be careful when increasing the amount of Jamaican rum though, as it can quickly become overpowering.

This Mixology Monday was quite challenging. Getting such a cocktail right is, in my opinion, much more difficult than balancing a classic cocktail. The amount of ingredients makes it hard to find the perfect balance. Everything needs to be noticeable and contribute to the cocktail. And since fresh fruit is involved you have to adjust the cocktail to match the characteristics of the fruit you use.

Nevertheless, it was a fun challenge and I'm pretty content with the resulting cocktail and rhubarb syrup. Another positive thing was that I could convince my girlfriend to buy another bottle of rum. Next week I'm probably picking up my series about aperitifs again. Or maybe something else will catch my interest. Find out by following me on Twitter or subscribing. Until next time!