The final chapter of my mead brewing saga, where I describe how the flavors developed and what I learned from brewing mead.

Welcome to the final chapter of my mead brewing series. It was in the middle of last year when I started to brew my own mead. Which means, now I have had enough time to observe how the mead developed over time. This week I want to write about the things I have learned and the things I want to do differently the next time I decide to brew mead.

I started fermenting the mead last year in July and after the fermentation began to stop, which was after two to three weeks, I siphoned off the mead to let it rest and age. I planned to make some mead for a trip during summer, so the first taste I got of it was in the middle of August. I was surprised to find out, that the two jars I made my mead in had developed differently.

It seems that I split the honey mixture unevenly, as one jar contained a mead that had a strong apple taste and was quite acidic. Meanwhile, the mead in the other jar turned out to be sweeter with more honey flavors. This was after just a short rest and both bottles of mead had quite a fresh aroma to them. Delicious, but not mellow. Drinking it chilled, provided a refreshing experience, however. 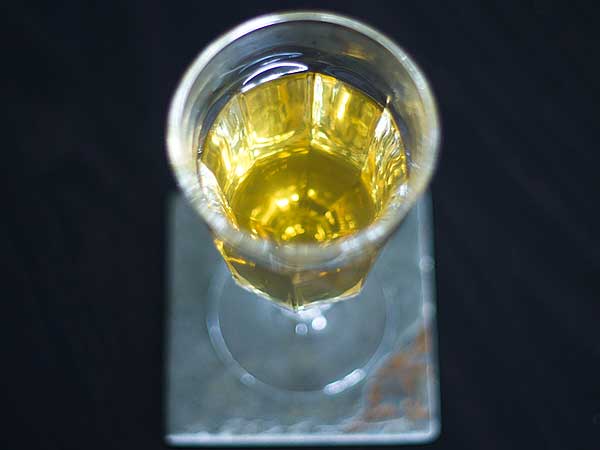 As both bottles contained different tasting mead, I decided to let them age separately and see where it goes. After some months had passed, it was some time in November, I tried them again and took some notes on how the flavors had developed.

It turns out, ageing is very beneficial. The flavors settled down and both batches had become more balanced and mellow. The honey had the chance to show its full flavors, while the taste of apple and acidity went down a bit. A really delicious drink even at room temperature. The refreshing nature had diminished, but the overall taste had improved greatly. 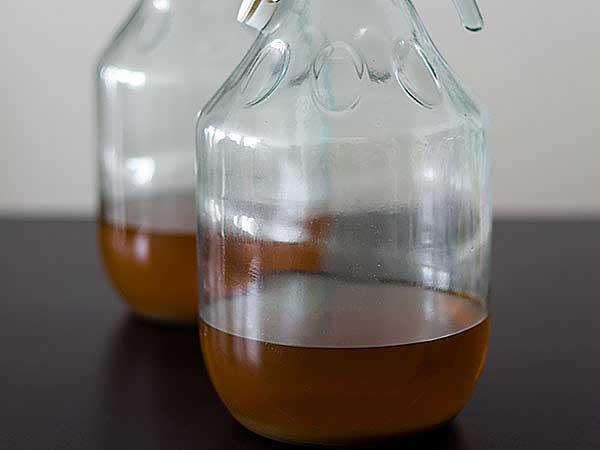 Here We Are Now

My mead has aged for four months now and as you can see in the image above, the amount left has noticeably decreased. The flavors were enhanced further. Both batches of mead are so smooth that you barely notice any alcohol.

The slightly apple flavored mead still has some acidity, but overall it's much more rounded. The other one is pure, mellow honey. Even smoother and without almost any acidity. As it turns out, this is my preferred version. Both, however, are very delicious and much better than any store bought mead I have tasted in my life.

Since my intention was to only make one type of mead, I also tried to mix both versions equally to see how it would taste. While the apple flavor is tamed a bit, it still is dominant. If you like that, then it's probably a very good mead. I still prefer the smooth honey version, though.

There are a few things, I'm taking away from this adventure. First, I probably will reduce the amount of apple and acid in my next recipe. The tangy flavor isn't bad, but personally I like mead better if it has a strong honey aroma. The second thing I learned is, that letting the mead age for a long time really improves the flavor a lot. Therefore, preparing a mead well in advance to when you actually need it is a must.

Another step I like to improve on is the siphoning of the mead after the fermentation is done. The upper layer is easily siphoned off with a normal rubber tube. Getting the last bit of mead without any sediments is however quite a mess. I ended up filtering it through a piece of cloth, but that wasn't enough. Right now, I'm transferring the last drops of mead to another bottle and straining it through a coffee filter, which takes a really long time.

Finally, my mead brewing experience taught me, that everything was much easier than I imagined it to be. Yes, the process takes some time and careful preparation, but it is so easy and the result is so delicious the pay off is huge. I urge you to try it yourself.

I hope you enjoyed my journey into home brewing mead. Having finished this series, there is another series I want to continue, but maybe not next week. In the meantime you can follow me on Twitter or subscribe to catch the latest updates. Feel free to leave your feedback as a comment below.

An interesting, non-alcoholic mixture between espresso, lime and tonic. Refreshing and full of caffeine. It's time for a first.…

Back From The Dead

Good news everyone, after a long break, I finally decided to arise from my slumber and go back to…