Ageing cocktails is one of those recent trends that I never fully understood, but am quite interested in. Why age a cocktail? After all the whole point of making cocktails is making them fresh and à point. So after reading a bit about the subject I decided to try it myself. I made some Negronis and began my research.

There is a lot of information about ageing drinks, whether they be wine, beer or cocktails. As I wanted to begin slow and easy, I decided to start with bottle-ageing. Much easier than barrel-ageing and the financial investment is negligible. All you need is a bottle and a cocktail that ages well.

While deciding on the ageing process was easy, it was difficult to decide which cocktail I wanted to use. Anything with cream or fruit is difficult to age, so this reduced my choices pretty much. I thought about all the classics like a Manhattan or Martini as they contain wine-based ingredients. I guess that they should age well because of that.

I made my final decision when I went out to a vintage bar and decided to order a barrel-aged Negroni. I was really unimpressed and could neither taste the benefit of barrel-ageing nor the fresh character that I like about this particular cocktail. To find out whether a fresh Negroni is better than an aged one, I wanted to try it myself.

For my little experiment I want to compare four different methods and see how they would influence the taste of the finished cocktail. 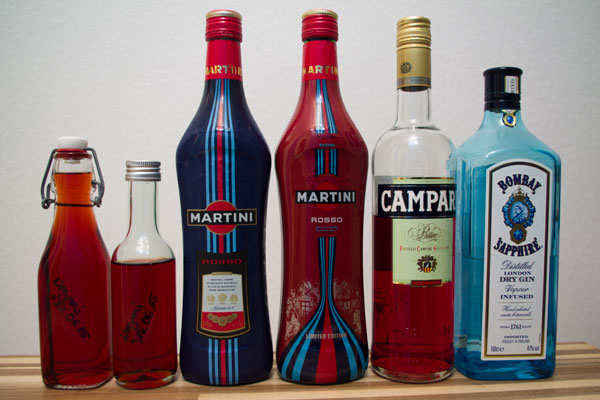 I adapted the second method from ageing fruit brandies. I once learned that they should rest for some time to take off the edges. As the process is accelerated when more air is involved, you can just store them with a piece of cotton in the bottle neck. This keeps out the dirt, but lets in enough air to make them good in about a month.

For all my different versions I used the classic recipe, as it is easy to remember and quite delicious.

Stir everything on ice in a mixing glass for about 30 seconds and strain into an Old Fashioned glass. If you don't want to fuss about, you can prepare the drink directly in the glass. Garnish with an orange zest.

The ingredients should be easy to come by and with this recipe you can't really go wrong. Of course a vermouth like Carpano Antica Formula will produce an even better Negroni, but it would have made my experiment a bit too pricey.

The hard part about bottle-ageing is making a cocktail and not touching it for a while. Although I have to say it helps to just forget that it is there. So after my bottles had enough time to rest, it was finally time to compare the different methods. 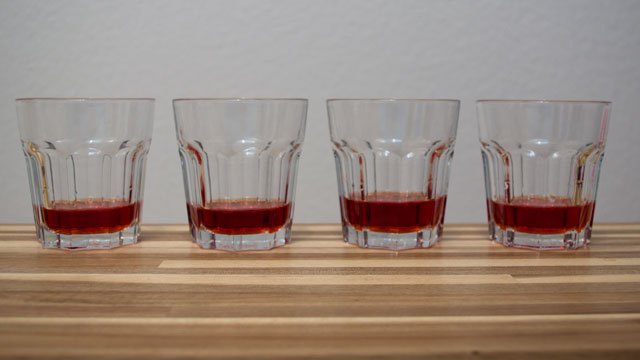 Don't be shocked because those glasses seem so empty. I just prepared half a Negroni in each. This allows me to somehow stay sober enough to judge the differences. As you can see there is no noticeable difference in color. After carefully watching them, I had to taste the fruits of my non-labor.

Bottle-Aged In A Sealed Bottle

Vermouth is the dominant player in this one. You can smell lots of herbs and everything seems well rounded. I couldn't get lots of gin aroma, so it seems like a really tame cocktail.

A bit sweet with lots of herbs is the first impression you get. Only in the aftertaste do you notice that there is gin present. And when the gin is gone you suddenly get a bit of bitterness from the Campari.

Bottle-Aged In An Open Bottle

Very sweet and a lot lighter than the other bottle-aged Negroni. You recognize very few herbs and it is almost like a wine or a mild vermouth. You wouldn't expect to taste gin or bitterness from those aromas alone.

Just as expected the taste is rather sweet with just a slight hint of bitterness. You have to concentrate hard to recognize the gin. Overall the flavors are well combined and everything seems to be blended together so nothing really sticks out. A cocktail without edges.

Made With Old Vermouth

The gin is the dominant aroma, but after that you can recognize a bit of vermouth. Compared with the aged versions I have to say it is a totally different experience.

As expected from a Negroni it is slightly sweet and herbal. The gin and Campari create a balanced cocktail with some bitterness. All the different tastes hit your palate at once, rather than one after the other.

Made With Fresh Vermouth

There wasn't really a noticeable difference compared to the Negroni made with old vermouth.

It is just a bit fresher than when made with old vermouth. Other than that I couldn't really make out a difference.

Both freshly made drinks were more powerful. I found version number one a bit weirdly balanced, since the different tastes arrive one after the other. A total contrast to the freshly made Negronis, because you are hit with everything at once.

I was rather surprised with the second version since there is almost not bitterness. I wouldn't expect a Negroni to taste like this, but I find it rather intriguing. It is my favorite version, despite being the least Negroni-like. Maybe the sealed bottle version will taste like this after more time, but I don't plan to find out.

If you know what negroni should taste like, then making a fresh Negroni is my recommendation. A nice balance of bitter, gin and herbs. While I admit that the second version is tasty, it all just blends together into a uniform mixture. Quite the opposite of the classic Negroni which has some edges and tastes rather fresh.

Considering that you have to store a bottle of Negroni for four months to get a tasty cocktail, I find it more convenient to prepare my Negronis fresh. It also enables me to partake in a Negroni whenever I feel like it.

Winter Is Coming I

Cranberries are in season and the days are getting colder rather quickly. A prefect time to work with these…