I recently acquired a Neat Ice Kit because the possibility of making big, clear ice cubes at home is very enticing. Buying a giant block of clear ice to shape yourself or spending several thousands of your local currency to buy a Hoshizaki to get clear ice cubes and spheres is just not an option for most people making cocktails at home. After a bit of playing around and seeing that the current Mixology Monday (MxMo XCIX), which is hosted by Feu de Vie, is about ice I decided to share my findings.

What's It All About

Why do people make such a fuss about crystal clear ice? First of all it looks better. The presentation of a cocktail is important, so big transparent ice cubes or a big ice sphere elevate a drink to a whole new level. Another important point is that the ice is free from impurities. They are those cloudy parts in your ice. Minerals and air are trapped when the water freezes and create these opaque spots. The problem with cloudy ice is, that the chance of cracking increases. When the ice cracks the surface area expands and more of your drink comes in contact with the ice. This speeds up dilution. Read some more detailed explanations here.

For most people producing clear ice probably isn't a priority and left to the cocktail nerds or professionals. However, I think going the extra mile to serve your cocktail with beautiful ice shows you care and will get you some positive responses. Therefore I want to take a look at how to get clear ice without much trouble.

How To Make Clear Ice

There are quite a few interesting articles about making clear ice cubes. A very detailed one can be found on Alcademics which I deem the best DIY method since the physics behind it are solid and the amount of work involved seems manageable. There are more methods on wikiHow, but I haven't tested things like boiling water twice in normal ice cubes, since lots of people seem to say it doesn't work. As pointed out earlier, another interesting read can be found on sciencefare which has a more sciency explanation on the whole process.

What seems to work best is to let the water freeze from the top and then let the impurities collect at the bottom or into water suspended below. The simplest methods seem to involve just an insulated cooler box you fill with water and put in your freezer.

Experiences With The Neat Ice Kit

I however chose to go the lazy and expensive way and bought a Neat Ice Kit from Studio Neat. (I am also invested in the Kickstarter campaign for Polar Ice Balls.) The principle of how the Neat Ice Kit works is similar to the method mentioned above: The ice tray is insulated so it freezes from the top. Since the impurities don't have a chance to escape they collect at the bottom. This means you won't have one large block of clear ice, but a large block where one half is clear and the other is cloudy. The advantages are that it fits into my small freezer (I would never get a cooler into my freezer, maybe the other way around) and you don't have to build something yourself. Also you get a stick to whack your ice with and a Lewis bag to produce crushed ice. A nice ice set. 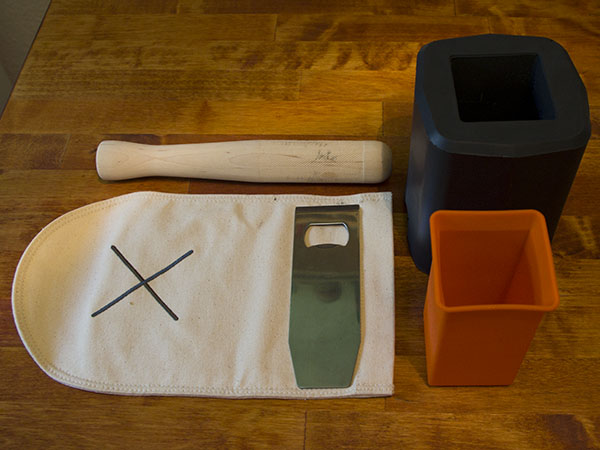 Does it work like advertised? Yes it does. I immediately filled it with water and put it in the freezer. One day later and I had a large block; the top was clear the lower part cloudy. And as advertised I used the cloudy part in my mixing glass and the big clear block went straight into an Old Fashioned. Truly marvelous.

But can I make the clearer part even bigger without much effort? Well I went ahead and threw some money at it (read: I bought some distilled water). Distilled water has been demineralized which means the only cloudiness in the ice should come from trapped air. Normally you should be fine with using normal tap water, but the water here contains lots of minerals, which is why I think distilled water will be better for me. There is an interesting discussion about how to remove air from water, but like many things in science and on the internet it sounds interesting but totally unreasonable (except the boiling water part).

Since I can't create a vacuum to store my water in so all the air gets sucked out (see previous link), I tried boiling distilled water to see if it made a difference. You can see the results below, from left to right: tap water, distilled water, boiled distilled water. 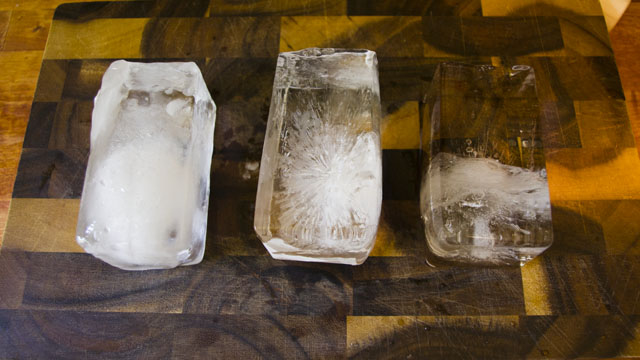 As you can see boiled distilled water yields the best result. I have to say that the image looks worse than the real thing. The tap water isn't that bad, but the cube has been stored a bit longer than the other two which came fresh from the mold. The cloudy parts at the top are mostly on the outside. The part that gets in the way is the large round cloudy part at the bottom.

So as you can see I could get a block of rather clear ice from tap water, but after seeing the results I shall boil distilled water in the future. Maybe the warmer water is responsible for the clearer cube, or maybe it's the air that has been removed by boiling. Either way it works.

What To Do With All This Ice?

The part of the ice block which is clear is enough for a nice big chunk which you can drop into an Old Fashioned glass to pour your favorite bourbon over. Also clear spirit based cocktails which are served in an Old Fashion glass surely benefit from such a lovely cube too.

If you break the ice down into smaller cubes you can use them in highballs, preferably highballs that are rather clear and not full of fruit juice. Something with ginger ale or ginger beer comes to mind.

But the holy grail of ice is a clear ice sphere (or an ice diamond). So that's what I decided to do. At least I wanted something which might resemble a sphere. Since I have no ice pick I just chipped off some corners and did the rest with a standard kitchen knife. I really had no plan other than to chop off corners until it was round. And it shows! 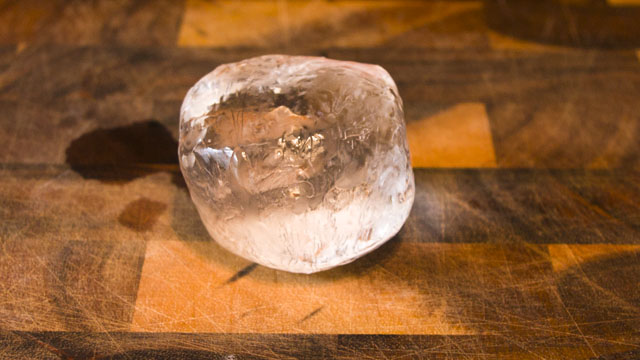 As you can see the sphere isn't totally clear. I used a tap water block for this. Also it isn't really a sphere. Before I can use this in cocktails to show off, I have a long way to go.

A Drink That Needs Clear Ice

Since my ice ball making skills aren't up to par I will use my nice giant clear block of ice. And I need to create a cocktail to show it off. My first thought was some kind of whiskey cocktail, but then I thought how boring that would be since it seems like the obvious choice. So my second thought was to create a crystal clear cocktail. A much harder challenge and just like Pepsi I run the risk of creating something which doesn't taste good. So here is what I did.

Because I am limiting myself to clear spirits, I can't use most whiskeys, rums or other aged alcohols. I'm not a big fan of unflavored vodka and I don't like the artificially flavored ones, so I guess that leaves me with gin, tequila and some mezcals, maybe some unaged rum. And since it is summer and the temperatures are rather high, I'd like something fruity which leaves me with gin and tequila. A coin flip later and gin it is!

The first thing that sprang into my mind was triple sec. It brings the citrusy notes that I need since I can't be bothered to make clarified citrus juice. But just gin and triple sec seems boring, so I take a look at my bar stock for something that would go well with those two.

After realizing how few clear spirits I have, I found a nice red Williams pear brandy which has an excellent and intense flavor. With 40% ABV it is a smooth pear brandy that carries a certain sweetness retained from the ripe pears. The brandy is a great neat drink but I think it will combine well and I shall spare a little for my cocktail.

Well just pouring alcohol together might work, but my experience has told me that I need some sugar to combine everything. Since simple syrup is transparent it's the obvious choice for my project.

Putting It All Together

If I were to shake everything it would become cloudy and that would defeat the whole purpose of searching for clear ingredients. Which means mixing glass and gentle stirring it is. The real challenge is to find a good balance. The first one I made was way too sweet even after dilution, but fortunately the second one came out just like I imagined. Since this has a rather high alcohol content I suggest stirring a bit longer to add enough water.

Stir everything on ice for about 60 seconds (less if you want a bit more bite) and strain into a chilled Old Fashioned glass with one large ice sphere (cylinders, cubes and diamonds also acceptable).

A strong drink with a rather light taste. The botanicals of the gin combine well with sweet pear notes. Quite fruity, but also not too sweet. The picture just doesn't do it enough justice. A neat effect I couldn't capture with my camera was the disappearing ice when looking from below.

The Neat Ice Kit works like a charm and I like the resulting blocks of ice very much. Whether you build something yourself or buy such a kit (or a similar product), the big clear ice blocks make amazing ingredients for your cocktails. So go ahead, try it yourself and become part of the cocktail nerds that make clear ice at home.

To see more icey adventures check out the MxMo Round-Up.

Matcha flavored sweets are pretty popular in Japan. As I'm a great fan of it myself, I want to…

The Old Fashioned. The grandfather of many drinks. A no nonsense, straight forward cocktail. Being the original Whiskey Cock-Tail…